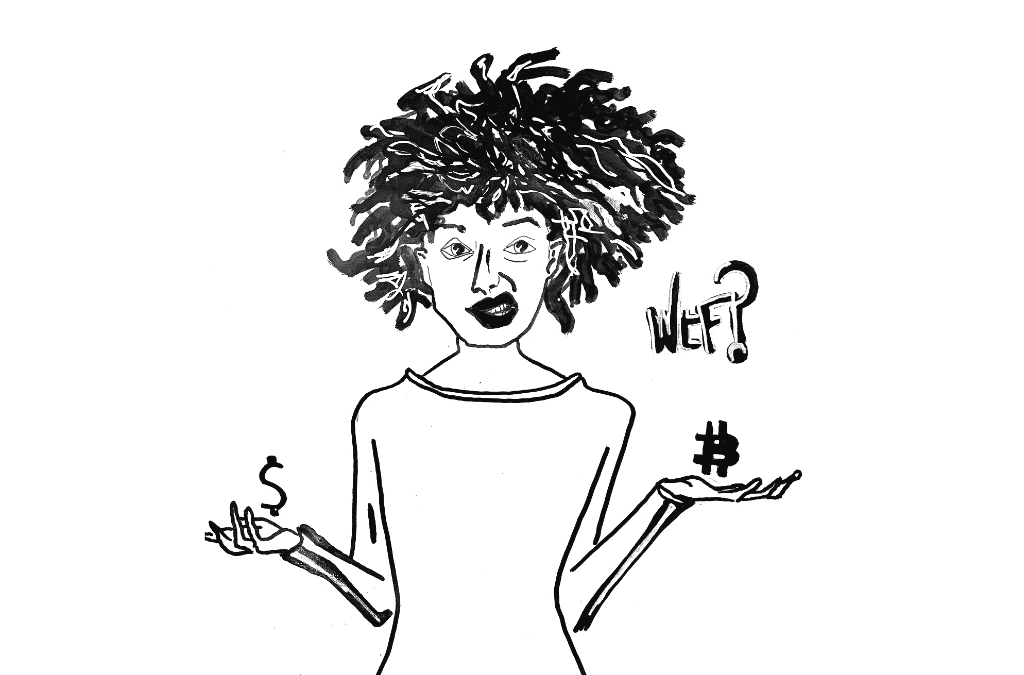 If you have no idea what crypto is, I made this for you.

What is Crypto? A blithering moron’s guide to crypto…

Look, I’m no cryptographer, MIT professor, or expert on technology. I know nothing. But after reading ten million articles, listening to seven billion podcasts, hanging out on Reddit and Discord, and talking with crypto nerds on Twitter, now I know some shit. So, if you’re TOTALLY fuckin lost with web3 and cryptocurrency and blockchains and all this shit, here’s my scrambled gregs approach to understanding this complex arena…

First, let’s talk about blockchains. And remember, I’m not gonna get all technical here, so all you crypto nerds hush up.

What is a blockchain?

Here’s a good way to think of a blockchain:

Like a BIG Macbook Pro, but in the cloud.

And people can create software for this virtual blockchain computer just like your Macbook Pro. Like Microsoft Word, or Garageband, or Netflix… but this new software (many of which do similar shit), has been created to work with a blockchain (the big computer in the sky), rather than your computer at home.

Blockchains are the same thing.

Each blockchain has a different operating system, and that’s why some people like one more than another.

Okay, so that’s what a blockchain is. A big computer in the sky.

Ethereum, Bitcoin, Solana, and Cardano are all examples of blockchains.

So blockchains are BIG virtual computers in the sky.

So then… what the fuck is cryptocurrency?

What is virtual currency?

The type of token you have basically says where you can use your gift card.

Just like gift cards, your tokens can only be redeemed in certain places, or they can be sold for cash if they rise in value. These tokens are issued by developers who are making new software for virtual computers.

The tokens these developers put up for sale are there so that you can buy a piece of the software they’re working on, and sometimes that software is a BIG hit, like Windows! So that Windows token, if it were a thing, woulda skyrocketed in value.

It’s like they are issuing shares of a company, but they are in the form of tokens. Anyone can buy them. It’s like every developer creates a piece of software and starts a Kickstarter campaign for it, and instead of you donating cash, you offer to buy tokens to their company, and the amount of tokens you have is the total value of your gift card.

It’s kinda like these developers are making apps for this virtual computer, and it’s like they’re running Kickstarter campaigns for whatever they’re building… totally different shit: games, cloud storage, new financial technology, metaverses (virtual worlds), or even search engines! And if you believe in their product, you buy some of their tokens to show support and own a stake in their product. Now you can use those tokens at their store to buy things, or you can wait for someone else to wanna buy em off you in cash.

Can cryptocurrency be used interchangeably?

Oh, and remember I said that there’s more than one blockchain? Well, there’s a reason for that. Each computer in the sky keeps getting better and better. Their operating system keeps maturing. Also, some of these computers in the sky are easier to program for than others, and so more developers make more shit for particular blockchains.

Imagine iPhones were easier to program apps for (I got no idea if that’s true). If that were the case then a lot of people would only make apps for iPhones while Samsung has to sit around and wait… Not only that, but some virtual computers have a bigger userbase, so it makes sense that the developers wanna go where the people are. Why program an app for Cardano if everyone is hanging out at Ethereum?

Bitcoin is its own beast. Cause here’s the thing… some of these big computers in the sky are not so nice, like Bitcoin. Bitcoin is was made for one reason, and one reason only: to be a decentralized virtual currency that can be shared from one person to the next. It’s a peer-to-peer form of money, so no banks are needed. But Bitcoin’s blockchain basically only supports Bitcoin tokens: BTC. And this token is only used to store value or trade as a form of money. You can think of it as gold. If you wanna spend bitcoin, you can send it to someone who accepts bitcoin, trade your bitcoin for another virtual currency, or you can liquidate it into cash, and then use it as a euro or dollar or whatever.

Basically, Bitcoin keeps to itself.

It was like: Nah. This big computer in the sky ONLY transacts money. Our money is called BTC. If you want some, you can buy it and use it on our virtual computer, but that’s it. No developers allowed. We create digital money and you developers stay over there and make shit on other blockchains, like Ethereum.

And remember I said some tokens were like MasterCard and others were like a Macy’s credit card? Well Bitcoin is that MasterCard. Their gift cards work anywhere… kinda like that pre-paid Visa card your uncle buys you for Hannukah.

What in the fuck are NFTs?

Crypto is money, and NFTs are stuff.

NFTs are things you can buy with virtual currency. It’s what happens when you use your gift card to buy something in a virtual store.

That’s what NFTs are.

And the thing about tokens is they are everywhere. You can buy as many as you want (if you can afford to). You can have many of the same tokens.

…you can only buy an NFT once. Let’s say Crate and Barrel starts a virtual store and sells virtual furniture for a virtual house you are building. There is only ONE piece of each of the digital furniture. You can only buy that couch once, cause that’s all that exists. The only way for someone else to have the virtual couch you have is to buy it from you.

That’s what makes NFTs so interesting: there’s only one of each.

So… NFTs are the digital goods or services your specific gift card can buy.

Can’t you just screenshot an NFT?

Well sure, but then what’s your next move? To lie to the world and tell them you actually own it? Well why don’t I just print out Moby Dick and slab my own cover on top of it and sell it as my own. Cause that’s plagiarism and it’s illegal. Well, screenshotting NFTs and pretending to be the owner also may one day be illegal.

I can stick a fake Mona Lisa in my office but then I would have to lie to everyone.

Also, NFTs aren’t just static art. It can be a video too. Or a song. Any THING that you can buy with your tokens that is not another token is an NFT.

What is Crypto RECAP

Cryptocurrencies are like gift cards that can be redeemed at certain places, or sold for cash.

And NFTs are the goods and services sold wherever your cryptocurrency gift card is for.

Some gift cards work in TONS of places, like ETH (the native Ethereum blockchain token), and with these gift cards, like those pre-paid Visa cards, you can buy digital art, or tickets to virtual events, play games, or get access to secret memberships.

And so that is today’s lesson.