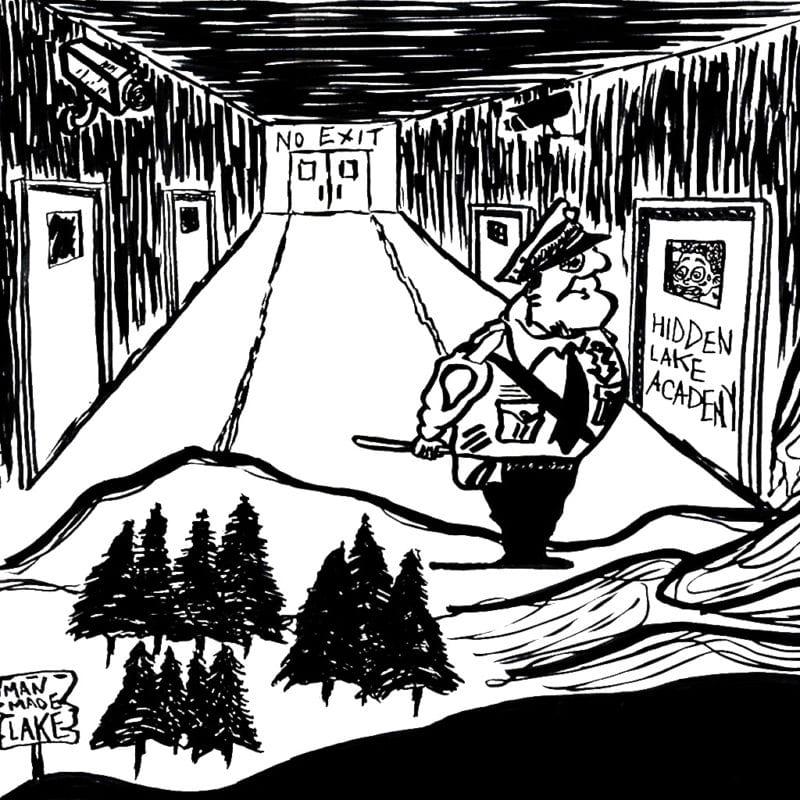 We drove Northeast from the Atlanta airport and were now somewhere in the barren Appalachian Mountains. I sat in the front seat of a red pickup truck, crammed in between two scary hick private investigators with a gun rack and rifle mounted to the rear window. I had no idea what Hidden Lake Academy was…

Country music twanged morosely on the truck radio. No one said a word. Nothing in sight except for an approaching archaic-looking board with splattered red paint that read FRESH PEACHES ONE MILE AHEAD.

We drove past a General Store with a cruddy porch. Old men from the cast of Deliverance sat outside on wooden chairs, wearing dirty white tee shirts covered in coffee stains and red clay, spitting tobacco juice, peering into our truck as if they’d never seen one… And when I say they were from the cast of Deliverance, I don’t mean that metaphorically. I found out later this is where they shot the film. I watched from my window as they (and I) faded from existence.

The truck kept moving until we were completely out of town. The backwoods swallowed the sides of the road and darkness swept the sky. My fate awaited. For the first time since middle school I felt terrified. Then came a jerky turn onto an even more desolate street that read: “Camp Wahsega Road.”

My thoughts were inaudible. My speech went missing. Every bump on the road stirred my anxiety. No point in crying for help, there was no help and I knew it.

A startling sharp right shot us onto a small pathway. Without warning we were trucking up a huge mountain. Randy, the monstrous man with a fat face and tight ponytail, shut off the radio. I spotted a small cabin in front of us.

What the FUCK was that?

My eyes followed the cabin until my head could turn no more. Shit. Where am I? Don’t think about it. Just keep cool. I took deep breaths, trying to remain calm. I could see something in the distance. We drove closer. It was some kind of brick building. We got closer and closer and closer and then

Welcome to Hidden Lake Academy. There were three dormitories. I saw this group of malnourished kids walking slowly and methodically toward me in a straight line, holding pick-axes, shovels and rakes. A large man in military uniform ordered the group to halt. In silence, and with complete obedience, everyone stopped as if their lives depended on it. Their eyes drifted in my direction. I could see it in their souls. It wasn’t pretty.

That’s what they were telling me.

But how? How do I get out? I’m paralyzed with fear. Where the hell am I? How’d I fucking get here? Where is Long Island?? But their heads made no such movement. There was horror in their eyes. Something felt really off. I needed to wake up from this nightmare.

The two private investigators yanked me unceremoniously out of the truck and took me into a barracks-like building then left me alone in a small room with a grizzled Vietnam war vet and a large burly mountain man with a flush red face and rug-like beard.

“Put yankee-boy-doodle in the bathroom and strip him,” the older man ordered.

I was taken into a bathroom. The door closed behind us.

“Take your clothes off and throw them in the corner.”

“SHUT YOUR MOUTH! I DON’T NEED TO REPEAT MYSELF!”

“WHAT THE HELL IS YOUR MALFUNCTION? ARE YOU DEAF? SHOULD I TALK LOUDER? HAS YOUR RIGHT EAR GONE BAD ALREADY? MAYBE YOU NEED A HEARING AID, WOULD THAT HELP?! I CAN FIX IT SO YOU’LL NEED ONE, SHOULD I?!!”

My heart was pounding.

“—YOU THINK I LIKE DOING THIS?! TAKE YOUR GODDAMN BRIEFS OFF BEFORE I YANK EM OFF YOUR YANKEE ASS!” Off they went. “PUT YOUR HANDS BEHIND YOUR HEAD AND BEND YOUR KNEES!”

Fear dripped down my neck.

He took three steps forward, clenched his jaw, looked me straight in my eyes and

I was naked, jumping like a frog for the amusement of two redneck, inbred fucks thousands of miles from my nice three-story home with elevator in Roslyn, New York. I was fifteen years-old.

How the FUCK did I get here?

And that was my first day at Hidden Lake Academy.

Here's how it all started...