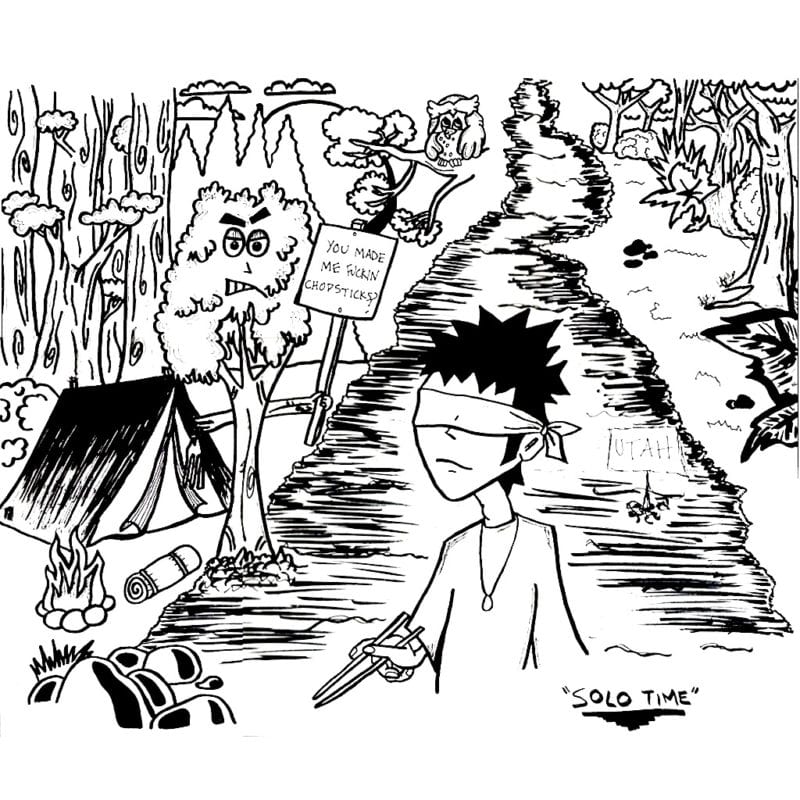 THE FINAL CHAPTER OF PART I

My blindfold was taken off.   I was in the middle of some forest. Another forest. I’m always in a fuckin forest.

This time I was alone. Well, Running Oak was with me, but none of the other kids were in sight.

“This is where you will be living now” Running Oak told me.

And then he gave me this set of rules. He said

“Once the sun is two fists over that mountain over there, you must be out of your sleeping bag.  No going to bed until there’re at least three visible stars out.

Then he demonstrated what I should do if I saw a black bear. He told me to lift my hands over my head and scream while running downhill, which is probably what I’da done anyhow. And for a grizzly, I was supposed to play dead.  Play dead? This guy kidding me? Fuckin lunatic. Anyway- None of that made me feel safer.

He recommended I meditate and assured me that he would drop off food everyday, then he left. What a joker this dude was. Recommend I meditate? Whatever Oak. Running Oak. Who gave you that stupidass name anyway?

I looked around. I had no idea what to do first. So here’s what I did. The first thing I did was I dug a hole with a stick I found and made myself a bathroom.  Then I took out my tarp from my backpack and built a cool lookin tent around some of the trees.  I mounded a buncha dirt together in the middle of my sanctuary and made this typa chair kinda.

A deer ran in front of me.  I said hi.  Then it hopped away.  I talked to the mosquitos when they bit me and told them they better fuck off.  I asked the Birch tree questions but it was too much of a bitch to talk back.

I tried to count the number of months it had been since I last slept in my bed… Maybe twentyyyyy-six? I waited eagerly for the stars to come out and as soon as I saw three of them, I went to bed.

I heard a noise.

It was the middle of the night.

I was petrified.  I couldn’t even move.  I thought it was for sure a bear about to eat me the fuck up.

With a shred of bravery, I opened my eyes and there was a wild horse standing right over me, just some horse, drinkin from a nearby creek that I hadn’t noticed when setting camp. I watched the horse.  What if the horse didn’t see me and stepped on my face?

That was a total possibility.

But she just slurped up the creek and went on her merry horse way.

When I opened my eyes again the sun was more than two fists over the mountaintop so I got up.  I found my dirt seat and meditated.

A mosquito bit me.  I reminded him to leave me alone.

I talked to the tree.

“Fine.  I’m making chopsticks outa you.”  I broke off two of her branches and whittled them down with a sharp rock till I had beautiful chopsticks.

I made up with her, the tree, and gave her a hug.  I let the mosquitoes bite me and gently waved them goodbye, careful to not hurt any of them.  I called for my deer to come back.

He was gone.  I was sad.  I meditated and looked through the forest.  I thought of Flower, the love of my life, I better write her a letter and tell her about these trees and horses and shit.  A bird flew down and landed right in front of me.  How nice, I thought.  He wants to be my friend.

He left me.  I must have been too aggressive.

The trees became so kind to me, especially Marty.  Marty kept me company.

Then Running Oak showed up.

Solo time?  Oh, that’s right.  I was on solo time.  That’s what this was called.

I had nearly lost my mind by the time my five weeks were done. I had a stack of seven million letters to Flower. Flower? Shit. Where in the fuck was I ever gonna find her? Where am I?

I had no idea how to get them to her or how to find her or where I was about to be transported to next or when I would be free but I knew my life plan:

To find Flower and hitchhike the country with her and never come back ever again. To finally be free, forever.

Then there was this white van. Yeah, I watched as the rear tires kicked up a trail of dust all up over the place.  I hadn’t showered or brushed my teeth in over a month.  I kept feeling my face to imagine what I might look like by then. I gotta beard thingy goin. Right on.

But wait, what’s this van all about?

The van was for me.  I was leaving.  I had made it through.  I was still alive and still relatively sane.

But I gotta tell ya… my sanity was nearing an end.

ALL THE REST IS IN THE BOOK!