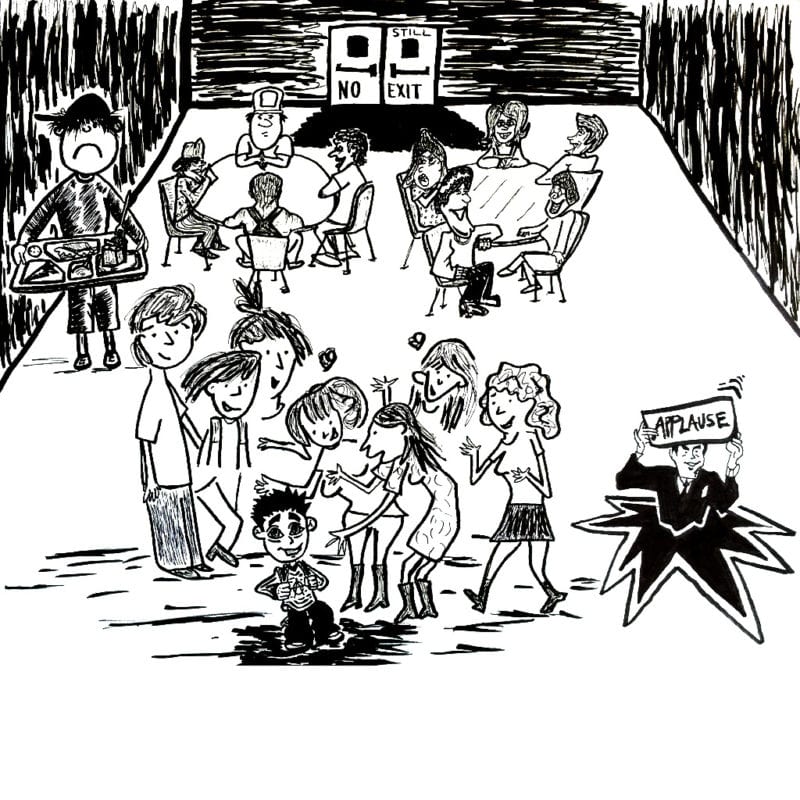 I was standing in the parking lot where all the buses picked us up after school one day. It was the beginning of the school year in eighth grade and my social status was the same, if not worse. I was the loser sidekick to the two other losers that were slightly less of losers than I was. So I was standing alone, well, Robby and Jon were talking a few feet behind me, God forbid I was included in an after-school-conversation… And then you know who came up to me?

Remember I was telling you that only the best of the best were allowed to talk to Brooke? And the select few that were considered her friends had attained nirvana? I still remembered that first day in sixth grade staring at her down the hall, wondering if my chance to say hi would ever come. And it all happened while I was waiting for the school bus in the parking lot. She just came up to me and said, “Sooooooooo my friend Olivia thinks you’re really cute.”

Wait, what? I couldn’t believe she was trying to talk to me. Did she just call me cute? I don’t know how I got my lips to move and vocalize a response, it had been years since I had any confidence at all, but it just came out, “Oh. Really?” My heart was pounding out of my chest I was so nervous.

“Mmhhmmm!” She confirmed while putting all her weight on one of her legs, one of those things that only hot chicks can do, and then she just stood there with this smile on her face as if she was givin me this gift of life, which she was. “Sooo… Will you go out with her?”

Go out with her? What in the fuck was— I couldn’t talk. I just– I don’t know what happened, but it just– I, well– “Sure. I would love to.” I said without hesitation.

Yeah. She thought I was cute.

So there I was, in front of Olivia, with Brooke right behind her, waiting for me to say something, but what the fuck do I say? This was foreign territory for me to put it lightly. The moment couldn’t have been more uncomfortable. We were just standing there, staring at each other. What do I say?

Brooke intervened “Ask her out!!!”

So I did. I said something like “So, umm, will you go out with me?” cause that’s how these types of relationships formed. You just ask that question, the answer is either yes or no, and then that’s it. Life changes.

She smiled and said “Yes”. Then Brooke said to me, she was so pushy, she said to me

“Ask for her phone number! She’s your girlfriend now!!!”

And she wrote down her own line. She had her OWN line?! I guess that’s what happens when you’re popular. Of course we were in a rich town in Long Island and I suppose lots of kids had their own line in their parent’s house but I just never knew to even ask my parents for my own line… I mean why would I? I had no one to call.

“He’ll call you later!” Brooke told her for me.

“Yeah, I’ll call you later for sure” I said like an idiot.

I snapped outta my dream-like state and looked around the parking lot to see if anyone had witnessed that miraculous moment of transformation.

Everyone. Everyone was looking. I had attained instant status.

Robby and Jon watched from afar with shock, but they didn’t know what was really goin on, they couldn’t like, hear us or anything. So I walked back towards them and waited for their reaction.

“The fuck were you doing over there Cayea?” Robby asked me with shocked curiosity.

“Olivia and I are going out.” I said with a moment of triumph.

Without even a laugh or change of expression he retorted “No really. What were you doing? What did they say?”

“Brooke asked me out. For Olivia. We’re dating.”

“Are you kidding?” Jon asked like a Martian had just offered him a hand job.

“How? How did that happen?” Robby asked.

“I mean, she just came up to me, Brooke did, and said that.”

I remember thinking to myself that I probably couldn’t be seen talking to them anymore. I was moving up in the world and middle school was a war zone.

“I gotta go home. See you guys later” I said as I walked to my bus.

“WAIT” as Robby hustled over to me, “You got to take us with you. Make us popular. Will you?”

What was going on? I was on a tidal wave of success and wasn’t about to blow it talking to a bunch of losers. “I’ll see what I can do.” I said as I quickly walked away. Things were about to change. I could feel it. I better go shower.